The Vex Robotics Strandbeast is a representation of one of the Dutch artist Theo Jansen‘s ‘beach creatures‘ that can be found on various beaches in Holland. The real thing is powered entirely by the wind, hence the ‘sails’ on this robot’s back. However, the robot Strandbeast has to make do with a couple of motors in its middle, and a set of gears to drive each leg (there are four legs being driven by each motor). Additionally, our Strandbeast has front and rear distance sensors, so that it doesn’t bump in to things. Like the Ant and Spider, it is programmable by switching a set of 6 switches on its brain and steerable by remote control.

The Strandbeast was quite a complex robot to build, because each of its legs has to be properly aligned when they are connected to the motor. It took me a while to understand this, so for quite a long time after I first built it it wasn’t walking properly. It wasn’t until I’d dismantled and rebuilt it a few times I realised what the key to it all working properly was, and now it is much more impressive. 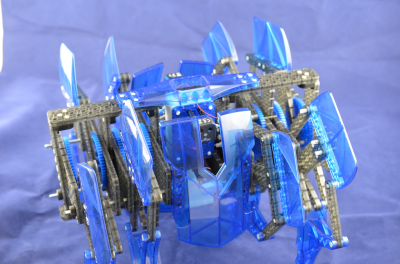 An 8-legged walking robot with front and rear proximity sensors, the Strandbeast is based on a 'beach creature' created by Theo Jansens

General Presentations on Robotics to year groups are available for FREE.

Some of the presentations we can deliver are: "Programming a Virtual Robot with CoSpace"; "An Introduction to robots and how they can be programmed"; "Robotics in the Real World"; "The Story of Robotic Space Exploration"

Robotics Themed Parties start from only £40.00 for a 60 minute Scout package for 4 children

The Scout package includes the use of Cubelets, Ozobots, Edison, Vortex and MiP robots. Plus there will be a surprise guest!.

Our Explorer package includes everything in the Scout package, with the addition of Jade, Sphero, Ollie, Wink and pre-built Vex IQ and Mindstorms robots.

The Adventurer package includes the whole RobotFun collection. This is most suitable for larger groups and older children, or those who are interested in robot construction as well as programming. To allow time for construction and programming, Adventurer parties last from 120 to 180 minutes.

At every party we'll introduce each of the robots in turn and demonstrate their capabilities.

We'll throw in some fun facts about robots, suggest a few activities and then it is RobotFun time!